A couple of Images from 2 Gigs Last Year


﻿
These are 2 gigs I’ve played recently. I was asked to play a gig on the 25th of October last year which was 1 day after I returned from a trip to Cairns. Just before I left to go, I had been playing around making tape loops and sampling them. What I was using was the high frequencies and hisses from the tape and modulating the sounds using a combination of filters to manipulate the texture of the sounds, creating a howling gale and moaning soundscape. I went from being in the Daintree Rainforest to performing in a bar in Melbourne in a day.

The second performance was a colaborative experiment with Cameron Brew. We had performed earlier in the year at the Library Art Space in North Fitzroy. Cameron had been talking about the ceremonial aspect of performing. For this second performance I had taken several samples from found vinyl records from a Japanese Temple and another of Buddhist Chanting and manipulated them live layering, reversing and filtering them. Cameron played using a feedback loop through a mixer using the mixers Aux sends to add distortion and delay.

I will be uploading the recordings from the gigs and putting them on the music page soon. I would like to thank Shane Reynolds for taking photo's and recording these events!!
Posted by Marcel Feillafe at 2:45 PM No comments:

alienspaceprobe: Shared Items in Blogger: "I have added a new bit at the top of the blog. It is a live connection to my google reader account, showing everything I chose to share. So ..."

Just a plug for the other site: ALIENSPACEPROBE at http://alienspaceprobe.blogspot.com/
Posted by Marcel Feillafe at 2:14 PM No comments:

Update for another show I had last year

This is an image from a show I had in November 2010. The gallery space is called Dwaft and is located outside the Victoria College of the Arts on a brick wall. It was being run by a Friend who was doing their Honours Degree at the time. I was asked to install in the space and little time to make a new work.
Way back in 2005 I believe, I was in the first year of my Fine Arts Degree. I made a work that was supposed to be a kind of shrine to the mundane. I lined up 200 tea light candles along a foot path in front of a brick wall. The work was documented using a video camera. It was a failure, and the resulting video became a kind of homage to this failure and the idleness of "hanging out", with footage of friends trying to light the candles in the wind, snippets of conversation about nothing in particular and jumping around in front of the camera.
So when I was asked to do a work directly opposite this place; a site, which for me, was loaded with feelings failure and mischief, it seemed logical to try and connect with the past work and make a new resolution. I was thinking about it like a glitch in time, where the past and present collide, invoking Deja Vu.
The candles from the previous work, were in the shed in an old biscuit tin, melted together making one large block of wax, the individual forms of each candle still clearly recognisable. This object had to be used. I had to give this thing meaning.
The video was played on a small screen, which I initially wanted to insert into the wax. I quickly dismissed this as an option, the process of carving out a cavity in this already significant object felt like desecration. It was a complete object that did not need to be altered or added to. So I had to work out how to incorporate this tiny video work. The video needed to be there to help pull the past forward, giving the candles context.
You can see the outcome in the picture although it is fairly low quality. Here are a couple of images to give you a better idea of the video. 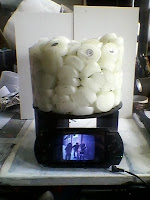 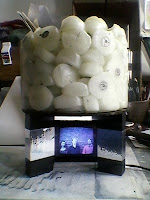 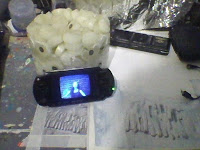 Posted by Marcel Feillafe at 9:19 PM No comments: